Matt, Emma and I had a BUSY weekend not only with cooking but also with some home improvement projects!

SATURDAY
We started the day with some great Crispy Corn Meal Bacon Waffles (p.500). This recipe was a great way to mix our favorite meat item, BACON, with a breakfast staple. Matt gave me a waffle maker for my birthday and this was the first time that I have put it to use... I am happy to say that I managed to make less of a mess than Matt typically makes. Of course he would point out that a few of mine had some holes which to me that is worth having less to clean up.
After breakfast we got busy around the house. Matt trimmed the trees and the yard and I straitened some things up around the house, re configured the spare bedroom, put together a Barbie apartment building for Emma, and went to the pool. After our busy day I caved and we just ordered Chinese for dinner.

SUNDAY
After my day of slacking off (in the cooking department) I decided that I would have to have special motivation to cook on Sunday. 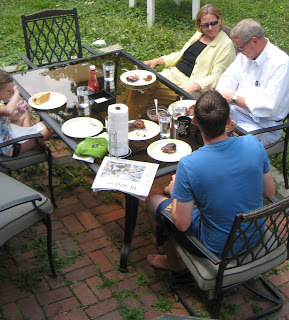 Once my parents brought Emma back from Sunday School I invited them to have lunch with us. I made Barbecued Chicken Thighs w/ Brown Sugar-Hickory Sauce (p.248) and Spicy Black Beans w/ Onion & Bacon (p.449). We ate outside in the HEAT!! The chicken thighs were perfect, super juicy and the homemade BBQ sauce was perfect. I was a little worried because I ended up not having the chili sauce that it called for (2 cups) but I simply decided to omit that part and the recipe turned out great. In the future I would make it exactly the same way! The Black beans were also great and a little more like a stew as they were also juicy. 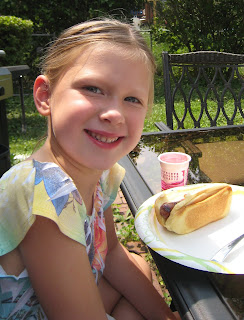 After dinner my parents were nice enough to take Emma to the pool while Matt and I tackled IKEA. They were super busy but Matt and I had a mission in mind and so we didn't waist a lot of time messing around with things. We bought a GREAT new kitchen island with a butcher block top and a shelf that I put some great galvanized baskets on for potatoes, onions, etc... Matt also picked out two tall leather stools for the bar area between our kitchen and dinning room. 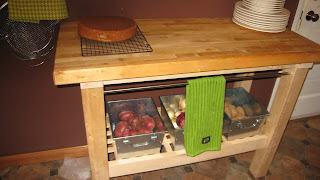 After we got back home Matt started to assemble our purchases and I ran to Safeway to get the groceries for the week. While I was out I decided the invite my parents for dinner when they brought Emma home from the pool. So we ended up having all of our Sunday meals with them :-) 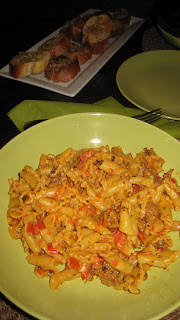 For dinner we had Castellane Pasta w/ Sausage, Peppers, cherry Tomatoes, & Morjoram (p.206), Shallot Bruschetta (p.554) and Warm Doughnuts a la mode w/ Bananas & Spiced Caramel Sauce (p.206). EVERYTHING was great and I would make it all again! I think that the dessert stole the show however! 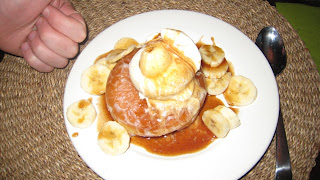