Dinner with the Rents

I met up with my mom at the Army Navy Country Club after work to pick up Emma. She had a pool play date with another little girl who went to her preschool last year. While I was talking to my mom she mentioned that she didn't know what to do for dinner and since I had four pork chops defrosted and waiting for me at home I decided to invite my parents over for dinner!

I feel so lucky to live only 5 minutes away from my mom and dad! They are a wonderful support system, a HUGE help with Emma, and as I am getting older I am learning to appreciate them more. I truly do enjoy spending time with them. On average we have at least one meal a week together.

Tonight I made Pork Chops w/ Cranberry Port & Rosemary (p.401) and Broccoli in Brown Butter (p.485) From start to finish the total cook and prep time was about 30 minutes and the outcome was delicious! The outside of the pork was perfectly browned and the sauce overtop truly made the dish unique. My only variation on the recipe was that I used Marsala in the sauce as opposed to the tawny Port that it called for. 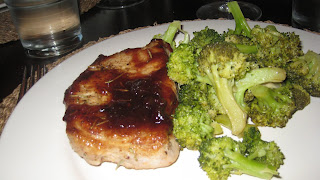 Yesterday I made pizza and it was a complete failure! Complete with a slight (Matt might say major) mental breakdown. To start... I thought that I would save time and buy the pizza dough from the store so that my only step would be to unroll it from the canister. When I opened the package I discovered that the Pillsbury Doughboy had failed me and that the dough was breaking apart and that I was unable to unroll it. I will admit, at this point I was super irritated. My shortcut had turned into an obstacle. Matt walked into the kitchen and found me cussing at the dough and angrily trying to get it to do what I wanted. He thought that he would be helpful and suggested that I might want to try another method and that is when "shit hit the fan." Looking back I can say that he was being helpful but in that moment I took all of my anger from the dough out at him. I proceeded to throw the dough and yell that he should do it if he thought that he could do it better. He is a WONDERFUL boyfriend and he took that same dough and proved that he could in fact do it better.

After the pizza was cooked or "seemed" cooked I took it out of the oven and after it had cooled Emma, Matt and I gave it a try... It was not good at all the top was borderline overdone and the dough was soggy and soft. I do not know what happened. Maybe it was that I was lazy and used the wrong dough or maybe the tomato mixture was too soggy. The night ended with a call to the Chinese restaurant...