Oh what a difference 4 years makes

So the election last night didn't go as we had hoped but as I Matt and I were rushing home from the RNC Election Night Party I started to think about how different my life is right now!

Four years ago after we lost the election I felt so lost. I was worried about my job and what an Obama White House would mean for me personally. When you work at the RNC your life revolves around your job during convention and right before the election. You become consumed in the politics and after you wonder what is next or even if you get to keep your job...

Last night many people at the election night party were in the exact same place that they were in four years ago. Yes... most had moved up within the party becoming deputies or directors of their divisions and some had children over the past four years... but one thing had not changed... they still lived for the election and their whole lives revolved around the outcome... but not me anymore I felt like I was on such a different track and while I was sad that we lost I was also happy that my life was not so dependent on something that I had no control over. I knew that the next day when I woke up that I would have a job... that my life was not going to fall apart because we didn't win...

I have a job working for a boss that I have tremendous respect for and truly enjoy, my job is not in danger, and I realized that my life no longer revolves around politics. At the end of a sad night I was going home to my two children and that is really all that mattered to me.

In fact as my mom handed me my crying baby that she had tried to calm for the last hour (He was also upset about the results)... Hunter stopped crying the second he was in my arms and of course I started to cry saying that I would never leave him again... Which is a lie because I'm going to have to leave and go back to work in 4 weeks... ehhh it is going to be so hard to leave this cute face! 5 hours was hard enough how am I going to stay away for 8??? 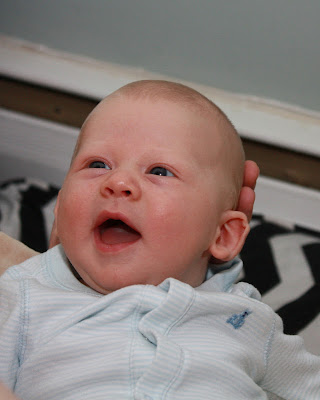 Right now my children are my whole world and I wouldn't have it any other way!
Posted by Julie at 9:28 AM